The Haflinger's history begins in Tyrol, Austria, in 1874.  In the village of Hafling, the first registered Haflinger was born... his sire was a royal Arabian stallion and his dam was a native Tyrollean mountain horse.

Named, rather unromantically, "249 Folie," he inherited his mother's strength, disposition and stamina ... while his father passed along an elegant grace and unbreakable spirit.

All purebred Haflingers trace their lineage to this stallion.

In 1875, the Austrian Imperial Ministry of Agriculture established an objective Halfinger breeding program, with stallions selected and owned by the government.  All mares (which could be privately owned) had to meet a series of difficult qualifications before being allowed access to a Haflinger stallion.

The breeding program was interrupted by World War 1, and the Haflinger as a bloodline became nearly extinct.

Okay.... so five minutes after birth he's not exactly pretty. 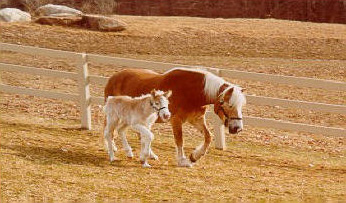 Two days later.... and a whole lot better to look at.

After the war, the Austrian government resumed its role as caretaker of the breed, and three stallions were acquired, each with its own standards, forming what were (and still are) known as the "A-line," the "B-line," and the "M-line" (based upon the first initial of each stallion's name).

Today, there are seven stallion lines: A, B, M , N, S, ST, and W (five of which are represented at Willow Brook Farms).

World War 11 again disrupted the Haflinger world, with this hardy animal being confiscated by the Axis powers to carry supplies in the worst of weather where mules and typical draft animals would not (or could not) go. Breeding practices changed, in keeping with the need for short, stocky packhorses.

With the end of that war, original breeding goals and standards returned, and have been stringently enforced ever since. The first Haflinger was imported to the United States in 1957. Several Haflinger breeding operations have since been established here, but -- of the 6+ million horses of all breeds which now exist in this country-- fewer than 20,000 are registered Haflingers.

Such relative rarity and such uncompromising breeding standards make a registered Haflinger one of the most sought-after horses in America today. 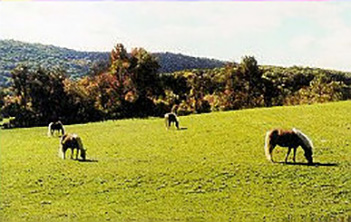 Autumn arrives on the Northwest Pasture.

All Haflingers are a shade of chestnut, with either a white or flaxen mane and tail. They range in size from 13.2 hands (54 inches) to 15 hands (60 inches), and fall into two basic types: “old-style" (shorter, somewhat drafty, used primarily for pulling carts) and "new-style" (more refined, taller, used for dressage, endurance racing, trail riding, jumping and various competitive events).

Both styles are to be found at Willow Brook Farms. 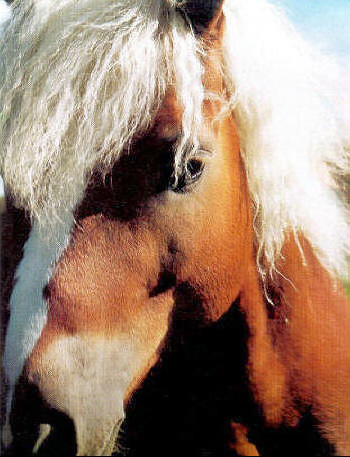